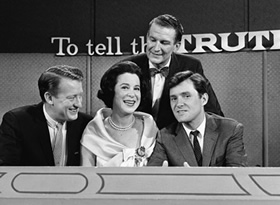 On this day in 1956, one of the longest running and most successful game shows in television history debuted on CBS-TV.

“To Tell the Truth” was created by former “What’s My Line?” producer Bob Stewart and hosted by Bud Collyer.

The show featured three contestants who were asked to identify a person from a panel of four people with similar backgrounds or occupations. The challenge for the contestants was to determine which one of them was telling the truth about his or her identity.

The original series ran from 1956-1968, but has been revived several times since then, becoming an iconic program that is still fondly remembered today.

Over the years, several versions of “To Tell the Truth” have been broadcast internationally as well as in syndication and on cable television networks such as GSN and ABC Family Channel.